In the near term, SLO County Citizens for Good Government, Inc. is focused on overturning the County Board of Supervisors’ egregious gerrymandering of the five supervisorial districts. The Board’s 3-2 decision on December 14th to approve the so-called “Richard Patten Map” imposes a radical change of voting district boundaries that have largely been in place for 30 years. By 3-2 vote the Board rejected the recommendations of civic leaders and the public, including Republican leaders, current and former police chiefs, and current and former local elected officials, by adopting the Patten Map -- which violates California election law because it was done to gain a partisan advantage in upcoming elections for the next 10 years.

WHY THE BOARD’S DECISION NEEDS TO BE CORRECTED

In 2019, the California Legislature amended the laws regarding the redistricting process. One of the key requirements of the law states:

“The board is prohibited from adopting supervisorial district boundaries for the purpose of favoring or discriminating against a political party.”

Because there had been very little population growth in SLO County since the 2010 census, there was no need to make any significant changes to the existing Supervisors’ Districts and, thus, any radical change could only be motivated by political interests. This is exactly what the majority of Supervisors voted to do when they adopted the Patten map, as it greatly increases the ability of Republicans to maintain control of three Districts for the next ten years.

Among other things, the Patten Map changed the boundaries of District 4 to give Lynn Compton a big advantage in the upcoming June 2022 election. In 2016, under the prior District 4 boundaries, Compton won against Paulding by 60 votes. So the Board carved Oceano out of District 4 and replaced it with the Edna Valley Country Club Estates neighborhood. This removed thousands of Democrats and added thousands of Republicans to District 4 to give Compton a better chance of winning. Indeed, in 2016 60% of Oceano voted for Paulding. What this also means is that citizens in Oceano will not be allowed to vote for a Supervisor in 2022 as they normally would have, while residents in the Country Club will get to vote twice in 2022 – once for the Supervisor of District 3 under the old boundaries and once for District 4 under the new boundaries.

The same adverse effect on fundamental voting rights is also happening on the north coast to voters in Los Osos, Cayucos, and Cambria. For example, voters in Los Osos are being removed from District 2 and transferred to District 5, thereby depriving them of their vote in 2022 and delaying their vote to 2024. Equally troubling is that coastal Cayucos and Cambria are being separated from their longstanding connection to coastal Los Osos and instead combined with rural Atascadero and San Miguel. This has the effect of changing the voting constituency from its former ratio of 46 percent democrat and 26% republican to the new ratio of 34% democrat and 39% republican – flipping the district. This reflects a blatant violation of the redistricting law prohibiting redistricting in order to favor one political party over another.

In 2019 the State Legislature determined it was time to stop both political parties from gerrymandering when redrawing voting districts boundaries, so it passed a new law specifically designed to prevent it. For example, whenever a Board of Supervisors changes the boundaries of its districts, it is required to follow these rules:

“Gerrymandering” is when the boundaries of a voting district are manipulated to favor one party or group. For example, look at the illustration below to see three different ways of dividing 50 people into 5 voting districts.

We believe what the Richard Patten map did was to Gerrymander the County’s voting boundaries to favor the Republican Supervisors at the cost of splitting up Communities of Interest (similar to what is shown in Example 3 below). 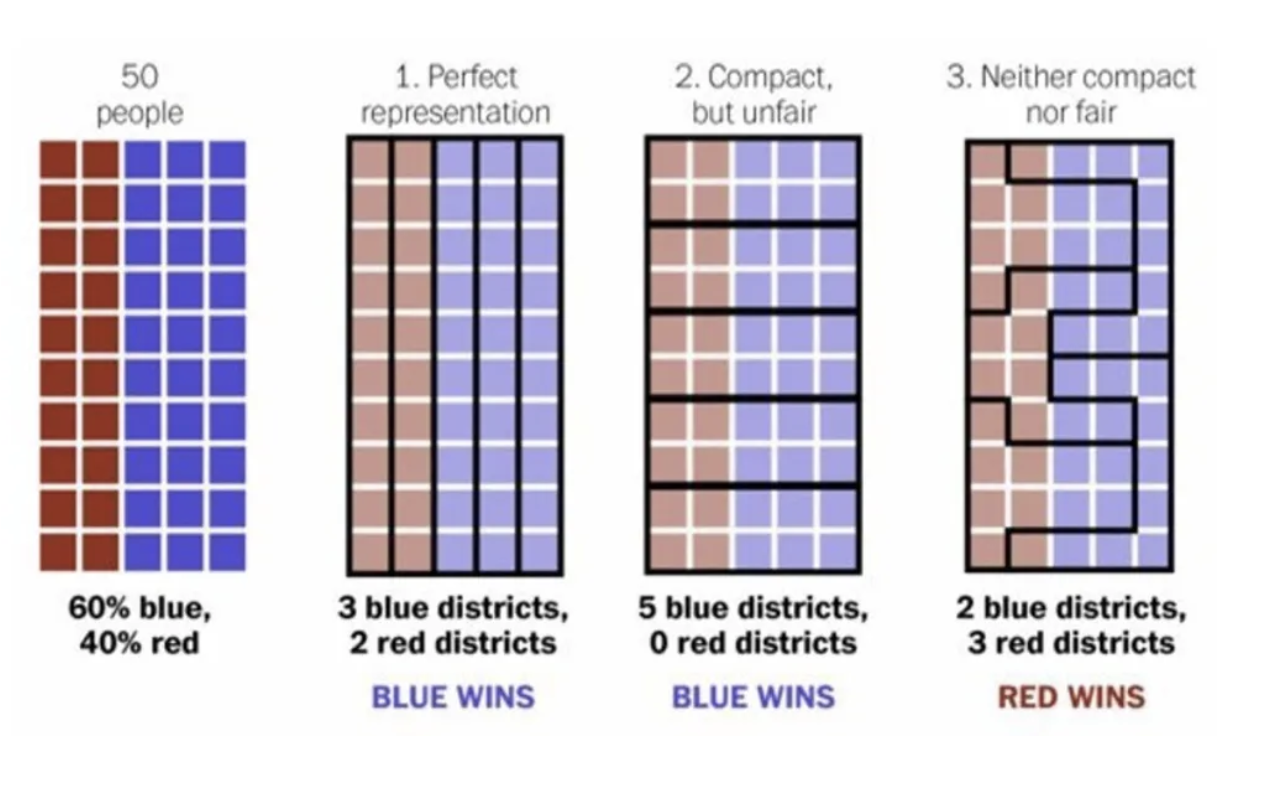 WHAT WILL THE LAWSUIT DO?

SLOCCGG will be filing a lawsuit in the near future asking the Court to declare that the Richard Patten map adopted by the Board of Supervisors violates the law; that it cannot be used in future elections; and that a legal map must be adopted. When the lawsuit is filed, we will post it here and provide updates as the case progresses. Our hope is that the Court will render a decision prior to the upcoming elections in June 2022.

MAP A & THE PATTEN MAP

The Board of Supervisors considered a number of proposals for redrawing Supervisor District boundaries during their 2021 process. A comparison of two of the maps, Map A and the Richard Patten Map, illustrates how the Board majority gerrymandered the maps for partisan purposes.

Map A was proposed by the County's hired consultant and essentially represented the current status quo with a few very slight modifications. Because the population of SLO County had changed little since the last census count in 2010 there was no legal need to make any changes and Map A represented that option.

The Richard Patten Map was submitted by a private citizen and was based on an unprecedented modification to Supervisor Districts across the County. The County Republican Party supported the Patten Map, held citizen training sessions on talking points, and mobilized citizens to write letters and attend Supervisor hearings in support of it. The Patten Map clearly favors one political party over another, a violation of the California laws governing Supervisor redistricting. For example, as a result of the radical changes, 34,000 voters will have their votes accelerated, meaning that they will have voted for a Supervisor in 2020 and again in 2022. Of these accelerated voters, 41% are Republican and 31% are Democrats. Another 29,000 voters will have their Supervisor vote delayed, meaning they voted for a Supervisor in 2018, but won't vote again until 2024 (including Oceano, Grover Beach, Pismo Beach, and Los Osos). Of these delayed Supervisor voters, 47% are Democrats and 25% are Republicans. Across the County, 49,000 voters will not be represented by a Supervisor until 2025. Likewise, the percentages of registered voters in the various Districts was changed to give a greater advantage to Republican voters in the upcoming 2022 General Election. For example under the current District 2 boundary (currently represented by Democratic Supervisor Gibson), Democrats make up 46% of voters and Republicans make up 26% of voters. Under the Patten Map, Democrats will make up 34% of the voters and Republicans make up 39% of voters -- a total flip. The District 4 boundaries (currently represented by Supervisor Compton) were changed from the current 35% of Democratic voters and 38% Republican voters to 33% Democrat and 40% Republican. This is a significant advantage to Republican Supervisor Compton when one considers that she won her last election in 2018 under the old boundaries by a mere 60 votes. 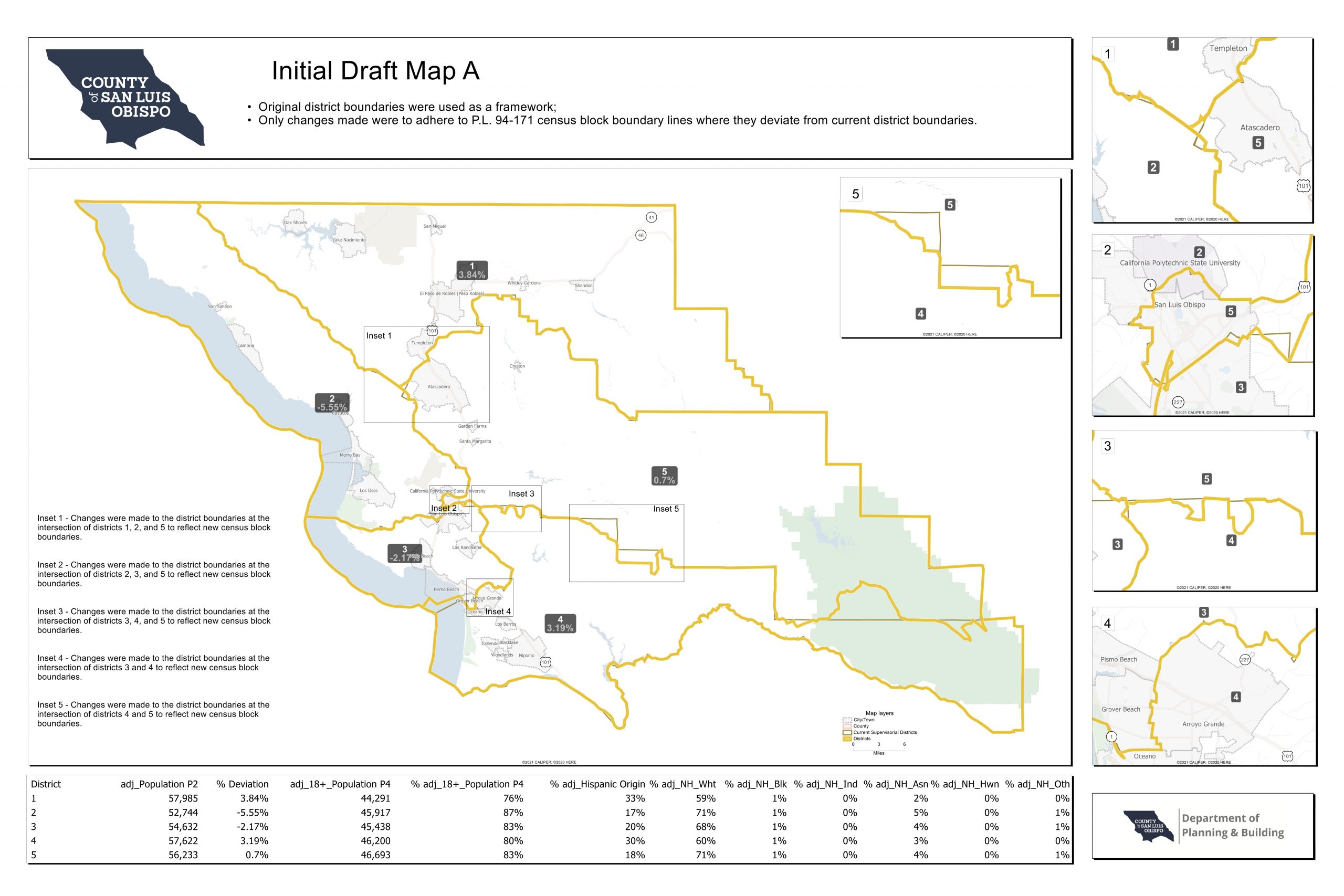 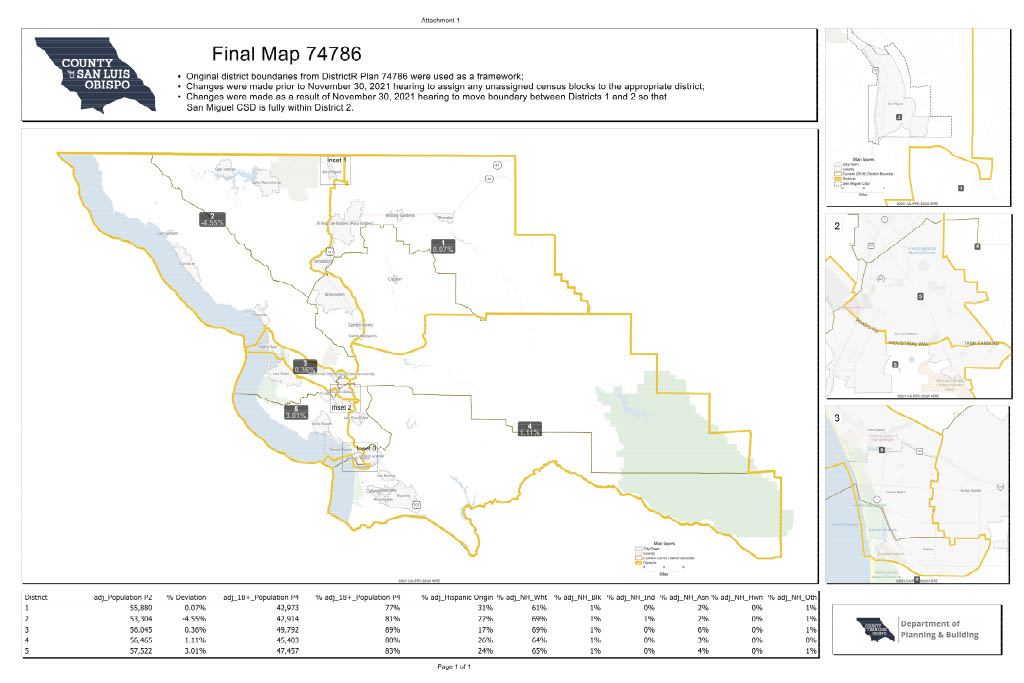